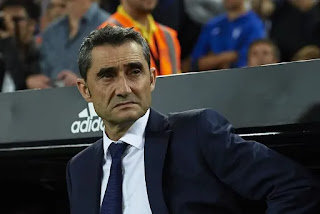 Barcelona president, Josep Maria Bartomeu, has revealed that manager Ernesto Valverde, has an exit clause in his current contract.

The clause could see him leave the club before his deal expires in 2021.

“Here every year you have to to win everything.

“There is no option: either you win everything or the season is no good.

“He has a contract until the year 2021, but next spring there is the option that club or he decides not to carry on, an exit clause,” Bartomeu told Catalunya Radio.

Valverde’s future at the Nou Camp has a subject of uncertainty, since he threw away a three-goal advantage against Liverpool in the Champions League semi-final last season.