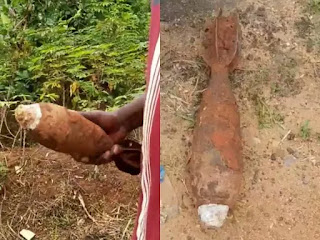 Biafra: Workers Discovered War bomb in Anambra village
Construction workers discovered a civil war bomb in Adabebe village, in Amawbia, Awka South Local Government Area of Anambra State.
The bomb was handed over to the Explosives Ordinance Disposal (EOD) unit of the State Police Command, who destroyed it.
According to the Police Public Relations Officer for Anambra, Haruna Mohammed, the weapon was a mortar bomb, adding that it was dug up by an excavator digging the foundation for the construction of a perimeter fence.
Mohammed in a statement said, “although, the weapon did not explode at the construction site, the Police found out that it was still very potent and could wreak great havoc if mishandled.”
The excavator, identified only as Onyekachukwu, said he initially thought the weapon was a tuber of yam given its shape, but that when he brought it out, he discovered that it was a bomb.
“We found this bomb at someone’s place while digging the foundation for a fence. As we were digging, we dug it up. We have called the Department of State Services (DSS) to come and take it,” he told reporters.