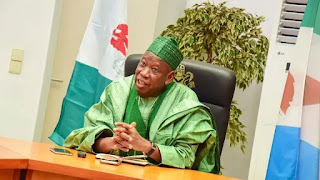 No fewer than 35 civil coalition groups called for the impeachment of Kano Emirate Emir, Muhammadu Sanusi II, in interest of protecting the rule of law.
The request was contained in a letter tittled “Kano State Emirate Council Law, 2019: Demand Letter” states clearly that, “The coalition of 35 Civil Society Groups under the above mentioned group (Umbrella Of Kano Concerned Civil Society Groups) are curiously studying the unfolding events in the running of Kano State affairs especially in recent time, as it relates to the lingering face-off between the Government of Kano State on one hand and the Emir of Kano on the other hand.”

The coalition remarked issues that arises after the ruling of High Court in Kano which sacked the newly established 4 emirates in the state.
The letter was signed by Comrade Ibrahim Ali, Chairman of the Coalition, which continues that, “Soon afterward, the same law, which repeals all the existing Emirate Councils Laws, and consolidates it in the Kano State Emirate Council Law 2019, was again been challenged first by the purportedly 5 king makers from one of the 5 Emirates established by the said law.”
The letter lamented that, even the “…second litigation was initiated by the so-called Kano State Elders who indulged their group in their understanding that, the Law was aimed at distorting 1000 years of heritage or thereafter of Kano.”
After narrating all the disagreed areas in the letter, the group demands that, “That the action of the Emir of Kano Malam Muhammadu Sanusi II of continued undermining the constituted authority of the government of Kano State and its organs, is not only unconstitutional, but is an effort to create a state within a state. Which no responsible leadership will tolerate and allow to remain unabated.”
After dismissing the “Kano Elders” claim in making reference to “1000 years of heritage” the group deems it to say that, that position was diversionary and only an attempt to derail from the reality, “…that the so-called elders making reference to 1000 years old heritage are completely derailing from the reality.”
They suggested that “With the recent decision of Kano State High Court, His Excellency shall proceed and ensure the full take-off of the Council of Emirs in the State. So as to stop the current distraction and generation of controversy.”
The letter seeks that, “If the Emir of Kano fails to submit to the authority of the government of Kano State, we call on the Governor of Kano State on a strongest term, to act strictly in accordance with the provision of Kano Emirate Council Law 2019 in order to heed the state forward.”

They concluded that, they hope their demands and recommendations get governor’s attention, noting and further necessary action, as provided by the Law establishing all the 4 Emirates in the state.