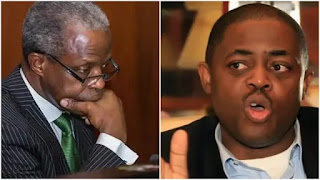 Tension as Osibanjo Asks To Resign By Fani-Kayode

Femi Fani-Kayode, former Aviation Minister, has said the Vice President, Yemi Osinbajo should resign or he will soon be used to “wash toilets.”
Fani-Kayode made the call while lambasting Osinbajo for allegedly flagging off the Use The Toilet campaign.
The campaign is aimed at putting a stop to open defecation across the country.
This follows President Muhammadu Buhari’s signing of the Executive Order 009 entitled, ‘The Open Defecation-Free Nigeria by 2025 and Other Related Matters Order’ into law.

However, Fani-Kayode in a tweet wrote: “VP Yemi Osinbajo launches and flags off the Use The Toilet Campaign, a campaign to stop open defecation in Nigeria while Buhari is presiding over a security council meeting!
“A few days ago I wrote: “If Osinbajo doesn’t resign they will send him to wash toilets”. Almost there!”